Afkar Center for Research and Studies is an independent, non-partisan and non-profitable research think tank that was founded in 2012 in Agadir city (Morocco) by a group of scholars belonging to different disciplinary fields, and which concerns primarily with academic researching and knowledge production in the fields of thought and humanities. It seeks to highlight the intellectual and academic approaches over the modern issues in MENA, and to create and promote a critical cultural and scientific climate within our cultural and academic institutions. To achieve these objectives, Afkaar center uses all available means such as organizing seminars, symposiums and forums, publishing research and policy papers, books reviewing, and doing partnerships with all the academic institutions that serve the same objectives.

The Center activities are divided into two focused types: the first one we might call it temporary activities organized temporary as a response to the emerging transformations and unprecedented updates that shaping our region. They demonstrate the engagement of the center with the world around by exploring the academic view carried out during the course of each event. Whereas the second type is the principal and fundamental activities which are designed annually to fulfil the overall agenda of the center. Hereafter are classified an example of the activities as follow:

A periodical assembly for reviewing the latest publications of young researchers in humanities and social sciences that matches with the interest of the institute. It is through this literary encounter that the center seeks to encourage young intellectuals and researchers, by introducing their academic works and achievements to the public audience. Each session consist of reviewing a new publishing book by a group of researchers with the presence of the author, and ends out with a book signing if enough scripts are available.

Forum of Young Researchers in Social and Humane Sciences

The idea of ​​the forum is centered around providing an academic platform where young researchers in humanities could produce knowledge, and expose their works to the public debate. Building on the interdisciplinary approach, Afkaar center is bringing together young researchers from different academic fields in order to entangle critically with the highlighted subjects of nowadays. The aim beyond this strategy is to firstly expand the interdisciplinary approach in the works of young researches, and to build on the other hand kind of newly perspectives based on their own entanglements and positionality as producers of knowledge. The first edition of the Forum dated out on 7 and 8 February 2015 and held in Casablanca under the title “Democracy and the perspectives of Moroccan Youth; Models of Modern Human Thought”.

Training Forum for Students of jurisprudent sciences and Researchers in Islamic Thought.

This academic and research forum aims at training students belonging to jurisprudent sciences to better use and profit from the methodologies and knowledge of other humane sciences. Its core objective is to widen their perspectives vis-à-vis of how to promote the Islamic studies by testing out its ordinary methodologies using the emerging human sciences. It is also an opportunity for other researchers and scholars from other disciplines to be trained and acquainted over the importance of knowledge integration theory, and its implementation between various fields of specialization, and in their works. The first edition of this forum was held in Beni Mellal (Morocco) between the 22, 23 and 24th of September, and was entitled “Humane Sciences and its Role in Developing the Perspectives of Researchers in Jurisprudent Studies and Islamic thought”.

Is of prosperous, free and democratic Arab countries, where religious freedom, rule of law, economic freedom and effective civil society.

Is to prepare, train and form young future leaders and scholars who will be part of a real socio-political change in the region, by identifying them, providing the academic tools & facilities, promoting their ideas and supporting their future projects.

2- The adoption of the multidisciplinary approach in addressing community issues

3- The promotion of liberty principles, democracy, human rights and peace.

4- The development of critical thinking, values of diversity and dialogue

5- The establishment of exchange and cooperation think tanks, civil organizations and other universities in Morocco & MENA region

6- Support young researchers and civilian actors in their changing projects in proportion with the values and goals of the center mentioned above.

Publications of the Center

Books: ‘The Religious Issue and the Pathways of Political and Social Transformation in Maghreb Countries’.

The book is a publishing project of the research papers presented at its second edition of the forum for researchers in social sciences and Humanities organized between 16 and 18 October 2015 in Rabat (Morocco). 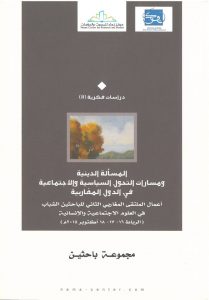